Think About It: The U.S. is Both the Richest Country and the Most Unequal: 8 Consequences of American Greed 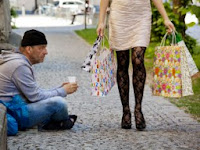