Libya: How Many Dirty Western Hands? 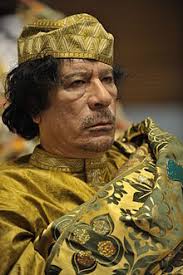 Oh what a tangled web they weave

When first they practice to invade

A sovereign nation and deceive

The world about their dark crusade.


This weekend a detailed article (i) suggested that a: “French secret serviceman, acting on the express orders of the then President Sarkozy, is suspected of  ”the murder of Colonel Quaddafi”, on 20th October last year.

Posted by African Manifesto at 8:51 AM